LIMITED OFFER!
BUY 2 PRODUCTS → GET 10% OFF (Any combination of our store products)

The large-sized Venus Cup is perfect for those who have a heavier flow or those who experience clotting.

The large would also be easier to reach for those who have a medium to a high cervix, or a very high cervix.

You may prefer this size if you have a light to moderate flow for the extra capacity and wearing time up to 12 hours.

The large Venus Cup has a capacity of 38ml to the air holes and 47ml to the rim. This is about 30% more than the average large sized cup and is equal to approximately 9 regular absorbency tampons.

Larger cups sometimes lose their firmness near the rim and can be difficult to open.  We have included an invisible secondary rim in which the silicone is slightly thicker near the air holes, as well as an inner ring for reinforcement. Both of these features will aid in helping the cup to open after the fold is released.

The Super Jennie has the grip and the size right, but is too soft so that I waste time at work trying to get it to open.

The XO FLO has the easy-open and the size right, but it's far too slick and I dropped it twice... used anyway after washing the first time because I was so desperate for a cup that would catch the flow. 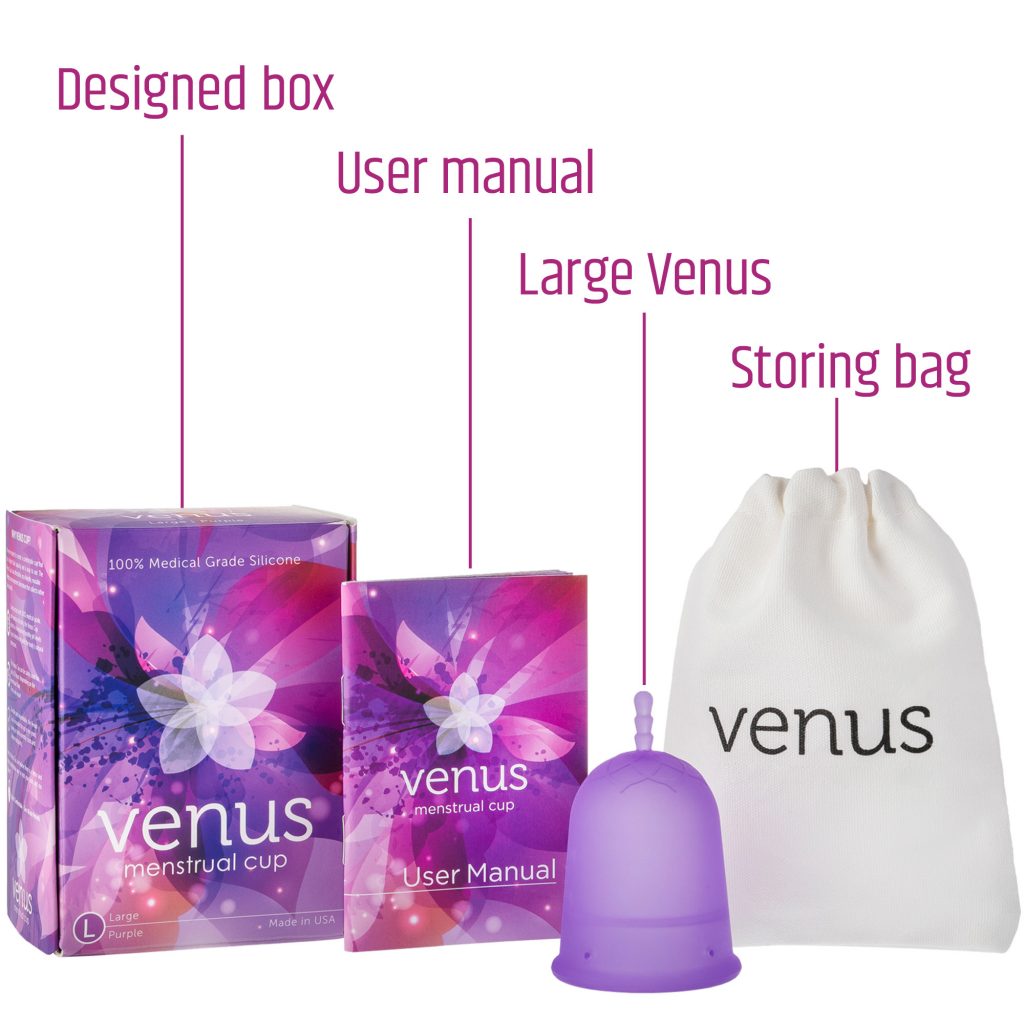 Everything Needed for a Happy Period! With the purchase of the large Venus Cup, you will receive a cotton canvas storage pouch and a detailed user’s manual packed with information and illustrations – all safely packaged in a Venus Box.

How does the Venus Cup work?

The Venus Cup collects the menstrual flow instead of absorbing without interfering with the body’s pH balance or natural processes.

What is the Venus Cup made of?

Where is the Venus Cup made?

The Venus Cup is manufactured in the USA and in an FDA registered facility.

How do I choose which size to get?

Is using the Venus Cup discreet?

Is the Venus Cup comfortable?

It should be! If you have any discomfort with it at any time, you may need to try different folding techniques, using a water-based personal lubricant, or changing the size.

Can I use the Venus Cup with a light or heavy flow?

The Venus Cup is great for a light flow, heavy flow, very heavy flow, when you’re expecting your period but not bleeding yet, or even just to stay dry from discharge!

The Venus Cup won’t have the familiar odor as a rotting disposable tampon or pad. Depending on your body and blood, the Venus Cup may periodically have an odor more like the smell of “iron”. This can be resolved – check this article for more info.

Will the Venus Cup Leak?

Like with all menstrual cups, there is a chance of leaking. This is a very common problem among new users. It may take time and practice getting things just right, but there are some things that can be done to minimize this from happening – click here for more info!

What type of Activities can I do while using the Venus Cup?

Everything under the moon and sun! The Venus Cup will allow you the freedom to carry on with your daily activities whether it be school, work, sports, or sleeping!

How do I Choose Which Size?

There are some things to consider when choosing the correct size for you.

To read more about choosing a size, please visit our Choosing the Correct Size page.

How do I insert the Venus Cup?

Please visit our insertion page for useful information and tips.

How do I remove the Venus Cup?

Please visit our removal page for more info and tips!

For additional questions and answers, please visit our FAQs page.